The New Mexico Prison Riot, which took place on February 2 and 3, 1980, in the state’s maximum security prison south of Santa Fe, was one of the most violent prison riots in the history of the American correctional system: 33 inmates died and more than 200 inmates were treated for injuries. This photo is of the aftermath of the riot. It shows the guards surrounding the grounds. It was reprinted in the Albuquerque Journal to acknowledge the anniversary of the riot. 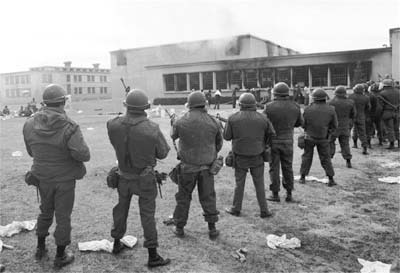