This is a letter from Albert Einstein to President Roosevelt in 1939. This letter helped to start the Manhattan Project. 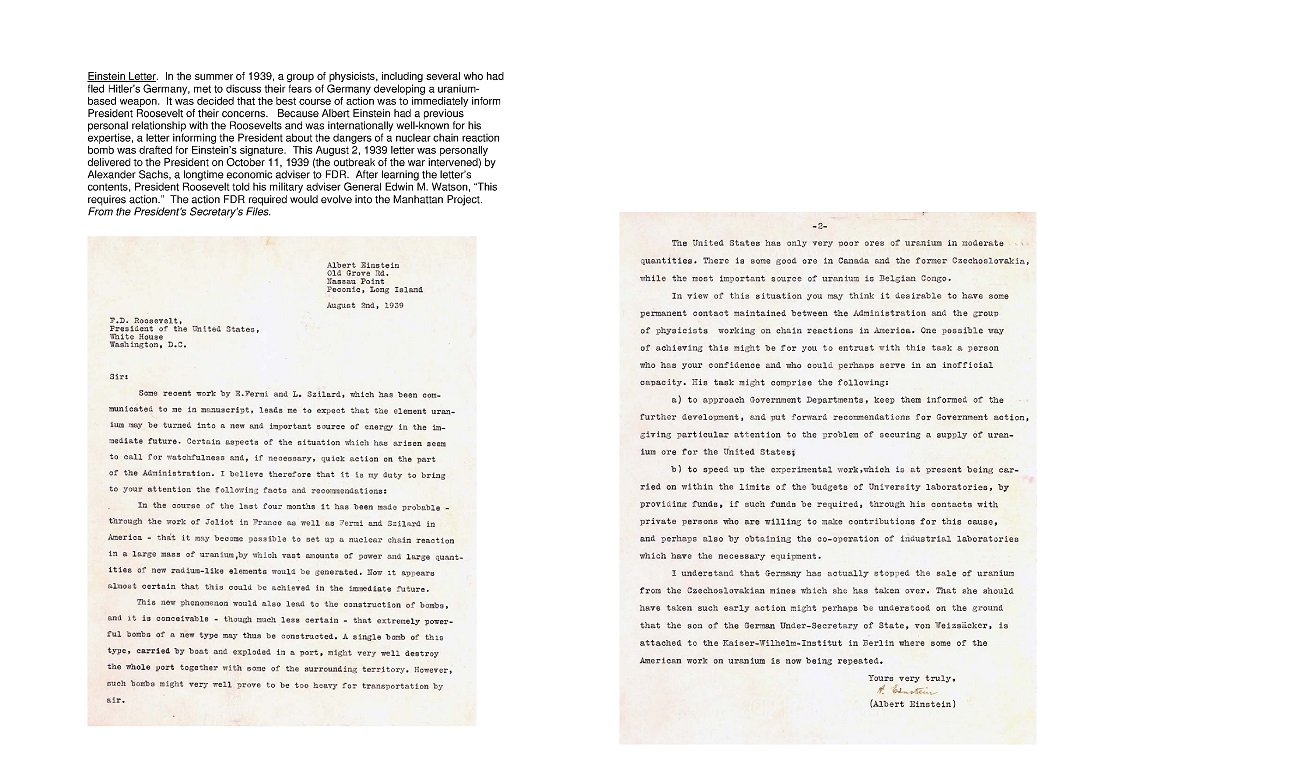 Some recent work by E.Fermi and L. Szilard, which has been communicated to me in manuscript, leads me to expect that the element uranium may be turned into a new and important source of energy in the immediate future. Certain aspects of the situation which has arisen seem to call for watchfulness and, if necessary, quick action on the part of the Administration. I believe therefore that it is my duty to bring to your attention the following facts and recommendations:
In the course of the last four months it has been made probable - through the work of Joliot in France as well as Fermi and Szilard in America - that it may become possible to set up a nuclear chain reaction in a large mass of uranium, by which vast amounts of power and large quantities of new radium-like elements would be generated. Now it appears almost certain that this could be achieved in the immediate future.
This new phenomenon would also lead to the construction of bombs, and it is conceivable - though much less certain - that extremely powerful bombs of a new type may thus be constructed. A single bomb of this type, carried by boat and exploded in a port, might very well destroy the whole port together with some of the surrounding territory. However, such bombs might very well prove to be too heavy for transportation by air, The United States has only very poor ores of uranium in moderate quantities. There is some good ore in Canada and the former Czechoslovakia, while the most important source of uranium is Belgian Congo.
In view of this situation you may think it desirable to have some permanent contact maintained between the Administration and the group of physicists working on chain reactions in America. One possible way of achieving this might be for you to entrust with this task a person who has your confidence and who could perhaps serve in an inofficial capacity. His task might comprise the following:
a) to approach Government Departments, keep them informed of the further development, and put forward recommendations for Government action, giving particular attention to the problem of securing a supply of uranium ore for the United States;
b) to speed up the experimental work,which is at present being carried on within the limits of the budgets of University laboratories, by providing funds, if such funds be required, through his contacts with private persons who are willing to make contributions for this cause, and perhaps also by obtaining the co-operation of industrial laboratories which have the necessary equipment.
I understand that Germany has actually stopped the sale of uranium from the Czechoslovakian mines which she has taken over. That she should have taken such early action might perhaps be understood on the ground that the son of the German Under-Secretary of State, von Weizsacker, is attached to the Kaiser-Wilhelm-Institut in Berlin where some of the American work on uranium is now being repeated.