The Zimmermann Telegram was a 1917 coded message from the Foreign Secretary of the German Empire, Arthur Zimmermann to the German Minister to Mexico, Heinrich von Eckard, offering United States territory to Mexico in return for joining the German cause. This message helped draw the United States into World War I and thus changed the course of history. 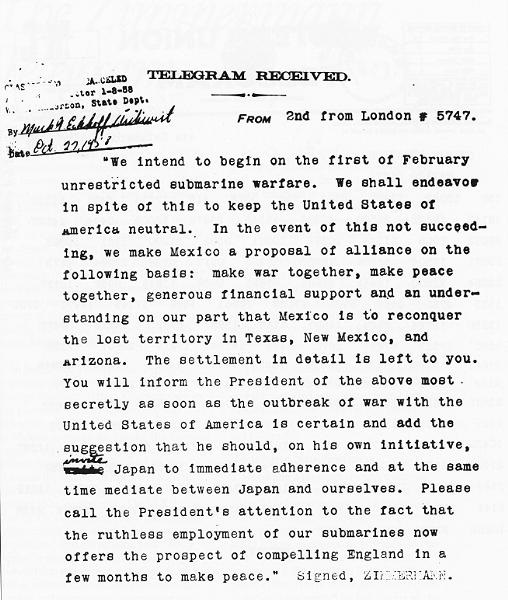 Digital Text:
"We intend to begin on the first of February unrestricted submarine warfare. We shall endeavor in spite of this to keep the United States of America neutral. In the event of this not succeeding, we make Mexico a proposal of alliance on the following basis: make war together, make peace together, generous financial support and an understanding on our part that Mexico is to reconquer the lost territory in Texas, New Mexico, and Arizona. The settlement in detail is left to you. You will inform the President of the above most secretly as soon as the outbreak of war with the United States of America is certain and add the suggestion that he should, on his own initiative, invite Japan to immediate adherence and at the same time mediate between Japan and ourselves. Please call the President's attention to the fact that the ruthless employment of our submarines now offers the prospect of compelling England in a few months to make peace." Signed, ZIMMERMANN